The GALAH survey uses the Two-Degree Field (2dF) fibre positioner with the HERMES spectrograph at the Anglo-Australian Telescope. This instrumentation introduces requirements on our observing strategy and target selection:

The GALAH survey target selection and observing strategy consists of two generations, with a shift in focus driven by data from Gaia:

The initial GALAH input catalog was made by combining the 2MASS catalog of infrared photometry with the UCAC4 proper motion catalogue. We only included stars with reliable 2MASS data, as captured in their data quality flags (Q="A", B="1", C="0", X="0", A="0", prox>6"). We also rejected any star that had a nearby bright neighbour, with a rejection radius dependent on the bright star’s V magnitude, such that the potential target is rejected if the bright star is closer than (130 − [10 × V]) arcseconds.

The four main projects included in the GALAH DR3 catalogue are GALAH-main, GALAH-faint, K2-HERMES, and TESS- HERMES. The survey_name column of the main catalogue (GALAH_DR3_main_allstar_v2) informs by which survey a given star was observed and its selection function:

The imprints of these various magnitude limits from each sub-survey can be seen above in the overall magnitude distribution function for stars observed by the GALAH survey (except for the other programs) as of March 2021.

A new focus for better ages

In Phase 1, we primarily observed a magnitude-limited survey with an easily reproducible selection function and a broad scientific applicability. But the parallax information from Gaia allows us to estimate ages for evolved dwarfs like main sequence turnoff stars and subgiants (MSTO hereafter) with a precision of about 10%. Ages are an exciting complement to our stellar parameters, abundances and radial velocities, and add an important new dimension to several of our main science goals. In Phase 2, we are focusing our observations on stars for which precise ages can be estimated. There are three important changes to our target selection and observing strategy in GALAH Phase 2: 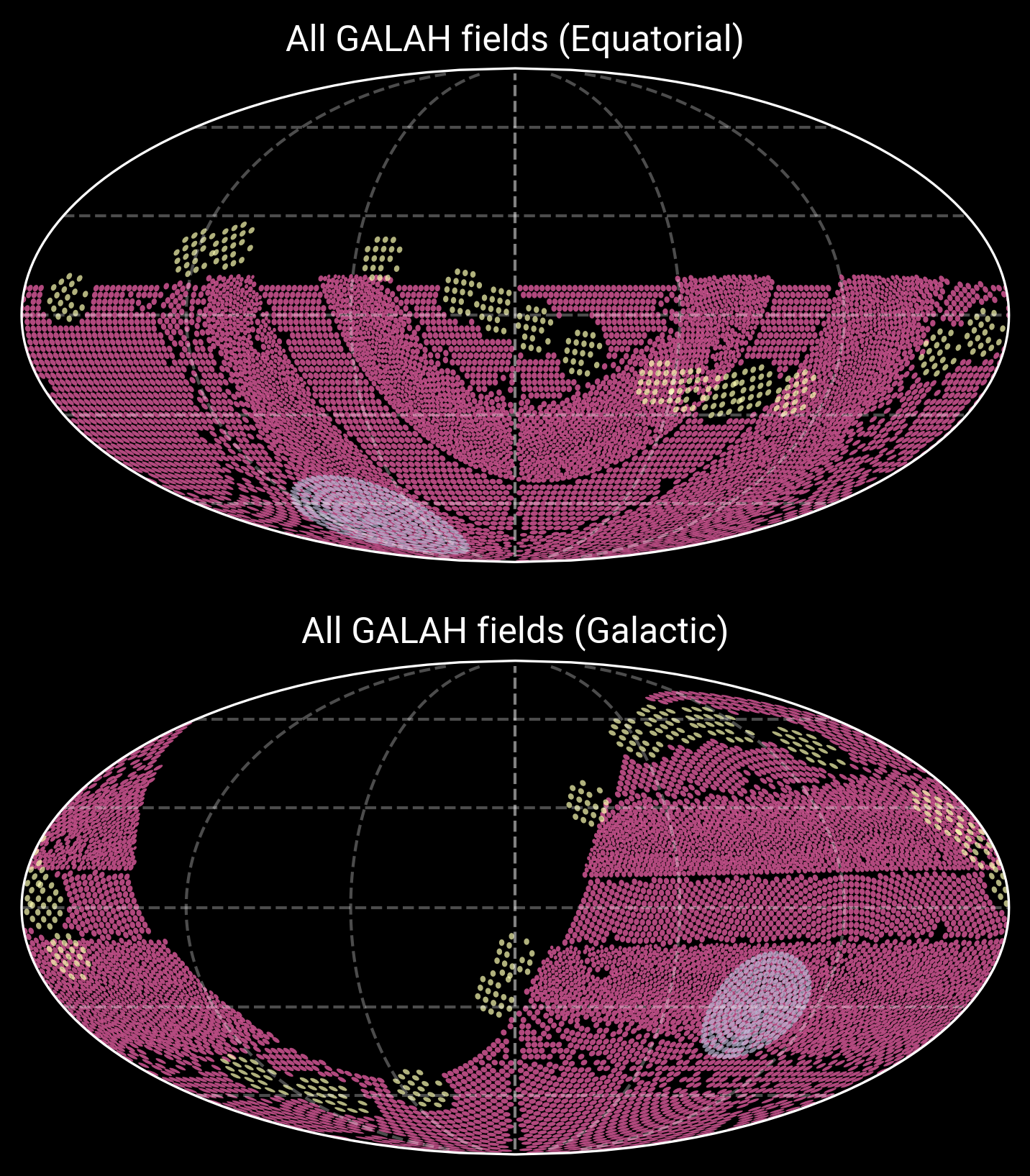 The list of all possible fields is available, and discussed in the DR3 Catalogue documentation. For a given field centre (i.e., a given ra, dec) there is an associated unique identifier (field_id). For a given field_id, there can be one or more possible observable fields — for instance if the target density is high enough, or there are bright and faint fields. Each possible configuration has a unique identifier of fco_id.

The observer at the telescope selects a field to observe from a list of possible fields identified by GALAH’s obsmanager software. This identifies fields that will be about 45 minutes from transiting the meridian at the planned start of observing that field, i.e., they will highest in the sky. The coordinates and proper motions for the targets in each configuration are input into the AAT’s configure software, along with a set of 20 candidate fiducial stars for guiding, and 50 possible “sky” positions. The fiducial stars are taken from the GALAH target catalogue in the same field of view, with magnitudes in the range 11<V<12. configure finds an optimal arrangement for the science targets, sky positions, and fiducial stars using a simulated annealing algorithm and outputs a file that is passed to the fibre positioning robot to set up the field. Further details on configure can be found in Miszalski et al. 2006.

The standard observing procedure for regular GALAH survey fields is to take three equal-length exposures (3×1200s in GALAH Phase 1; up to 3×1800s in GALAH Phase 2), which is extended to four science exposures if the seeing is between 2 and 2.5 arcseconds, and to six exposures if the seeing is between 2.5 and 3 arcseconds. Flat-field and arc exposures are taken directly before or after each science configuration, since moving between the two pseudoslits of HERMES moves the position of the spectrum traces on the detector slightly. Bright-star fields are observed in evening and morning twilight, and in case of seeing too poor for the regular survey fields.

Distribution of average achieved S/N per pixel for the green band (CCD 2) as a function of VJK. The dashed white line is our S/N=50 aim, and the red curve is the median S/N achieved as a function of magnitude.